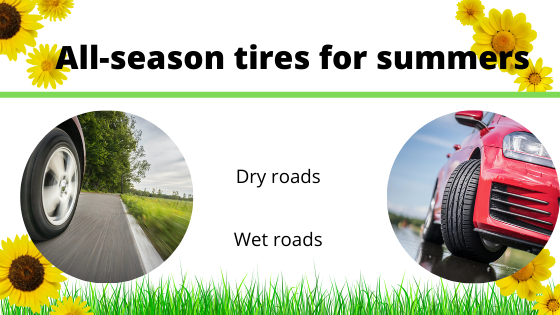 So why are all-season tires the tires with the lowest rolling resistance? This is because tires like winter tires and all-weather tires have deeper tread blocks to help with grip and traction on snow and ice. Since all-season tires are not made for winter weather conditions and do not hold the “Three Peak Mountain Snowflake” emblem they are not required to have such an aggressive tread pattern. This in turn equals lower rolling resistance which helps make the car more environmentally friendly which is of course the reason many people invest in hybrid and electric cars.

Tire size can also play a role in rolling resistance. It is recommended to follow the manufacturer’s guidelines for tire size for the make and model of your car. This is because placing larger or wider tires than the recommended size tires actually decreases the fuel efficiency by increasing the rolling resistance. Most hybrid or electric cars actually come equipped with all-season tires from the factory. The other big advantage with these tires is that they can be used year-round if you live in an area with mild year-round climate which is the case in many areas of the United States. There has been lots of new innovations to produce tires that are capable of providing both low rolling resistance and a quiet drive.

If you live in an area with mild all year-round weather, then all-season tires remain the best choice especially for hybrid and electric cars. On the other hand, if the winters are severe then you have the option to place winter tires on your car in the winter, or to buy all-weather tires.